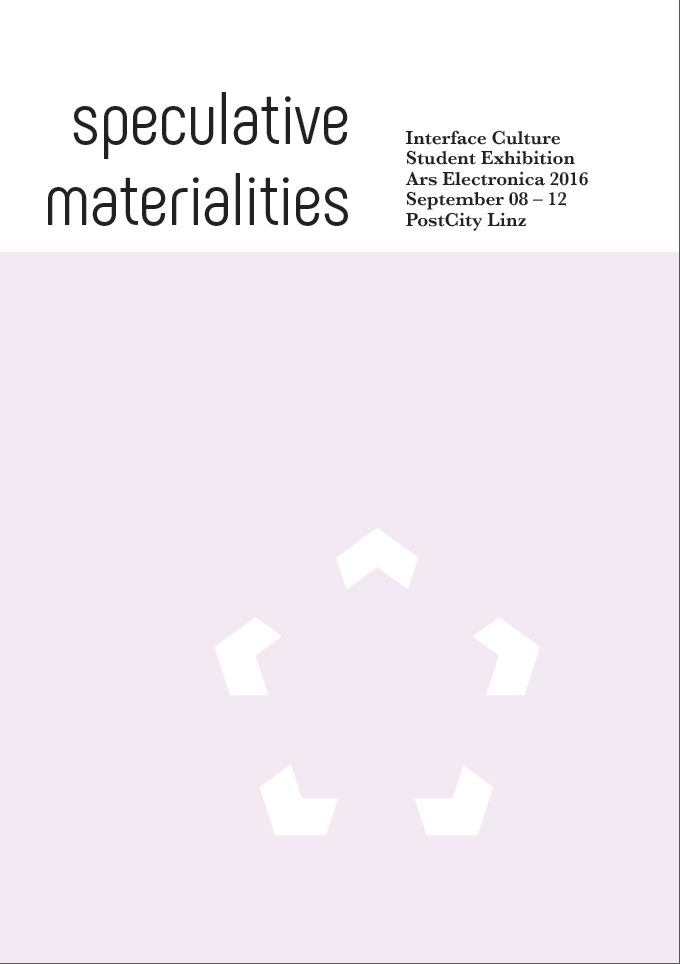 This year the Interface Culture department intends to celebrate the emergence of new sensibilities in respect to speculative investigations of new materialities. The presented projects and prototypes are designed to free us from having to spend a large part of our lives hunched over desks. They aim to liberate us from seeing our lives pass by on monitors, illuminated by cold LED light. The projects provide us with powerful, smart, physical objects. They show us some possible future potentials of materials. All of these themes are explored in this year’s Interface Cultures student exhibition. It emerges from practices involving the evolution of our contemporaneity. You will find neither screens which display representations, nor pure virtual worlds with supposed abstractions, but rather agglomerations of materials: objects, that give rise to material speculations. From questions of our relation with time, to the identitarian principles behind national symbols; from sculptural forms which remind us of the centrality of materials in art to improbable calculating machines and improbable sports for consumers; from critiques of a society which binds us to our habits and demonstrations of more literal constraints, to the needs for the exercise of power and control; from speculations on and materializations of processes and technological empowerment to retrospective reflections on our natural state, combined with environmental concerns; from interfaces that involve challenge and choice to the progressive sensing of the social interaction on the net.

is an old calculating machine hacked to be used as a miner validating the pending bitcoins transactions in the blockchain (online distributed database). BitterCoin combines the Internet of Things, media archaeology and economy. The operations are displayed on the calculator screen and printed afterwards. Shopping Mill is a meditation on the relationship between de-realized labor and senseless consumption. A trip into the military entertainment complex. Muzak – the company – was founded by a highly decorated war veteran. Its product was not only developed to make people feel comfortable in uncomfortable architectures, but also to heighten attentiveness and productivity in the work place. Is it the music that keeps you going or is it the other way around? The Bitcoin was originally conceived as an electronic decentralized system for capital transactions. Each node (user) had the same opportunities to get a reward when validating a transaction. In the last years this system has triggered a competitive struggle in which computing power is the most important variable for earning bitcoins. This involves the use of large equipment, computer farms requiring physical and environmental resources. A struggle that benefits only the owner of the most powerful and efficient technology. BitterCoin takes up this discourse in a rhetorical way. It works as the most basic computer, increasing the time needed to produce bitcoins to almost an eternity.

is a speculative and interactive installation that creates an astronaut suit for a fish, giving it the ability to move around by taking advantage of robotic arm. Inspired by “Becoming Animal” by Deleuze and the approach of critical design, this project proposes an ecosystem and biosphere for animals. It provides a high-tech scenario and the right to explore the “outer-space” for animals, meanwhile giving people a vigilant and reflective contemplation.

are sound sculptures made out of ceramic. Their metallic glaze, a traditional decoration technique, works as a sensing element. The sculpture senses the touch of the visitor and reacts by resonating.

With the speculative design project Green Filter, the artists Irene Ródenas and Julia Nüßlein propose a symbiosis between humans and nature. The visitor is invited to imagine we’d be using nature’s elaborate ways to filter the air that we breathe, instead of causing polluted air and ecological imbalance by exploiting the earth for plastic and oil. Imagine plants being part of our every move, and every human having a pet plant. Green Filter consists of wearable objects made from plants and natural materials that filter the air we breath. The objects challenge habits and assumptions, and encourage critical thinking about our position on planet Earth.

a performancelive-sonic-installation, could be seen as another fruit in a long term collaborative exchange between the musician Jens Vetter and visual artist Sarah Leimcke. The potent medieval-futurism of the images invoked in this happening enter the mind of the viewer and stay there, imprinted. Themes of weight, detail, passivity, activity, and the macabre swirl and augment each other to produce a quality of “theatre” which is both accessible and occult. Homo Restis engages with the evident environment and abstract space through the presence of both Vetter and Leimcke. Both appear as “men on strings“, marionettes, as the Latin term ”restis”. They attach themselves to the environment and to each other. This moments of “getting attached” is transformed as sound.
We can ask ourselves: how can material of this fantasy be a catalyst for solid exploration?

The installation consists of a seemingly solid monolith/cuboid hanging from the ceiling. It looks like it fl oats. When the visitors inspect it from a nearer distance odd wave-like movements can be seen emerging on its surface. The material seems to change its gaseous state, starting to seem rather soft or even appearing liquid.

is a sound installation of an ongoing composition made out of rhythms of everyday life. Visitors are able to set different loops, according to the duration of daily activities in a time-frame of 24 hours. The data is transformed into an audible sequence, that makes it possible to observe these patterns, mix them, and relate them to others. Arrhytmia questions the subjectivity behind routine and repetition, through regarding the multiplicity of the uses of time, and the appropriations of personal rhythms that coexist with the ones imposed.

This installation deals with the combination between the digital and the analog world from the output of personal data. The project includes a digital interface that takes personal characteristics and creates an individual calendar. These datas are used as points on a paper strip of a music box that will be translated to a melody and visuals. The combination between digital and analog brings a new way for perceiving and understanding everyday used interfaces such as a calendar. Personal data of anyone receives a new interpretation for lifestyle, schedule, events and the outcome based on different data will change from one person to another. Visit mymusicalendar.com to create your own calendar.

reflects about certain aspects of the past and present of Ibero-American colonial panorama. The paradigmatic date of October 12 reminds us that in 1492, Christopher Columbus arrived to America for the first time. The #12OCT Spanish state officially celebrates the beginning of the colonization of America as the day of national holiday or Hispanicity Day, by holding a sumptuous military parade. In the colonized countries of Latin America this date is known among other names, as Day of the Race or Day of Indigenous Resistance. Patricia Cadavid This interactive installation makes a critical approach of the controversy of these different connotations, with the use of simple and open devices to the public, using social networks like a collective thinking sensor on both sides of the Atlantic. It utilizes data visualization as a physical form with a representation of a world map provided in a container with water and three ships of proportional size symbolizing the caravels led by Christopher Columbus. Two engines direct the flow of the water from a continent to the other, depending on the reading of the real-time data that are generated with the search of specific hashtags on twitter.

Is Europa a Utopia?

This interactive installation shows a European fl ag which is hanging from the ceiling. The spectator can move around the artwork. By doing so he/she provokes constant changes on the installation. The fabric moves, sound appears, also depending upon how many people are around. The air of fans move the flag. It opens, closes and shakes in order to create an air sculpture. It is possible to have a look inside the empty sculptural space.

Suan (chinese: to calculate) is an installation projecting fractal patterns and animations based on parameter input from an abacus. The visitors participate by playing with the abacus. A hidden camera captures the numbers, which the participants enter on the abacus. These numbers will be used as different parameters to generate different fractal images. The work shows the charm of mathematics from a different approach. Filled with cultural and artistic inspirations, it is also accessible to people from different age ranges, education levels and nationalities. One does not need to know exactly what’s going on with the complex calculation to enjoy the beauty of mathematics.

is an interactive, multisensory installation: a treadmill augmented with display and headphones. Walking on the mill simulates a shopping experience with Muzak playback and an endlessly unfolding, 3D-generated shopping aisle. BitterCoin is an old calculating machine hacked to be used as a miner validating the pending bitcoins transactions in the blockchain (online distributed database). BitterCoin combines the Internet of Things, media archaeology and economy. The operations are displayed on the calculator screen and printed afterwards. Shopping Mill is a meditation on the relationship between de-realized labor and senseless consumption. A trip into the military entertainment complex. Muzak – the company – was founded by a highly decorated war veteran. Its product was not only developed to make people feel comfortable in uncomfortable architectures, but also to heighten attentiveness and productivity in the work place. Is it the music that keeps you going or is it the other way around?